The Downtown Oakville BIA will be hosting the 42nd annual Midnight Madness on Friday July 19 from 6 p.m. – midnight. Although downtown Oakville is currently undergoing phase 1 of the Lakeshore Road Revitalization Project, the event will follow a very similar format to previous years including a road closure on Lakeshore Rd and all side streets between Navy St and Allan St. We invite you to share with your community members and join us to experience live music, family-friendly entertainment, brag-worthy deals and more at Midnight Madness! Attached to this email you will find two versions of the event creative – if you require different resizes I’d be happy to send them to you. 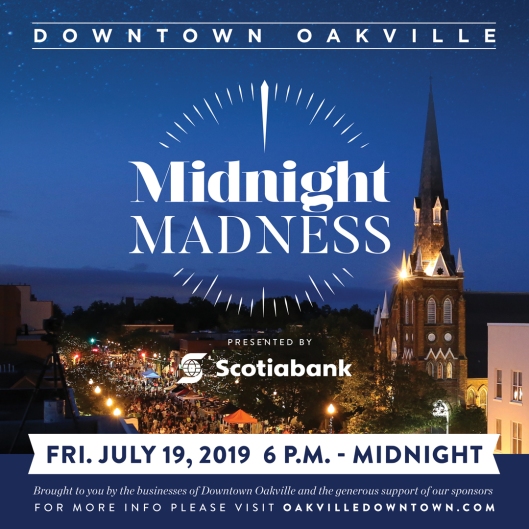 Come on out and meet your neighbours, while helping to beautify our West Harbour area!

Tea, coffee, donuts and garbage bags will all be provided by the WHRA!

Bring your own gloves and rake.

The event will begin at Carol Gilbert’s house at 130 Burnet Street, on the South West corner of Burnet and Brant streets.

Help our neighborhood for an hour of tidying up, then back to Carole’s house for coffee and a chat with your neighbours.  After all, it’s the people that make the West Harbour area such a great place to live! 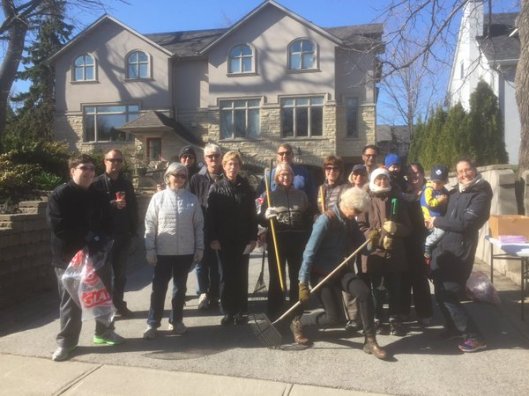 ·         Leaning small sticks against doors (including garage doors) to determine if anyone has returned home (opening the doors will drop the stick signaling that someone is home);

·         The same vehicle slowly driving by a house approximately 3 times within a short time frame; and

In addition to the attached poster, please take an extra precaution to:

·         If someone rings the door bell, answer the door or at least make it known someone is home by calling out;

·         Avoid keeping garage door openers in your car.  Thieves are known to break into cars and use the opener to access your garage and house; and

·         Call police if you see something out of the ordinary in your neighbourhood.  You know your neighbourhood better than anybody else.  Please report suspicious activity to the non-emergency line (905-825-4777).  The Halton Police will be more than willing to investigate.

The following is a 28 minute video regarding how to prevent break-ins and recent fraudulent scams with Oakville Mayor Rob Burton and officers from Halton Regional Police Service:

If you’re looking for specific information on how to protect your home, please go to the following times in the video:

The Security Camera Resource and Mapping program (SCRAM) enables our community members to voluntarily identify their residential video surveillance location through our secure and confidential online form found on the Halton Regional Police Service website, https://www.haltonpolice.ca/scram/.  This tool will assist officers when investigating criminal activity in your neighborhoods and furthermore, deter and prevent crime. Please consider registering your camera(s).

Please call the emergency line only to report a crime in progress or, another emergency where assistance is required immediately:EMERGENCY 911

If you have any questions and would like to learn more about residential break and enters, please visit www.haltonpolice.ca or, contact Constable Brennan Bryan by email or phone.

Although we are a sailing organization, operating in the Oakville Harbour, a number of our members have expressed an interest in having yoga classes available at our club and now we have weekly yoga lessons.

In our efforts to be more involved with the surrounding communities of Oakville, our Executive has agreed to extend an invitation to surrounding Oakville residents to join us in weekly yoga classes at a cost of $10.00 per lesson.  Participants pay as they go.  Yoga classes at OYS are held each Friday at 9:30 a.m.

If appropriate, could you please inform your Association members that they welcome to receive information about the location and time of yoga classes by contacting our Club Coordinator, Karen at karenwykes@oysqn.com or simply show up 10 minutes before class (will be held in the “Crow’s Nest’ until May). Because space is limited, we suggest that interested parties inform Karen that they would be attending.

Recently your WHRA Executive Committee, along with other Oakville Residents Associations, joined the grassroots organization We Love Oakville, which has been formed to Stop Amalgamation and we are appealing to you to support this campaign.

As you have chosen to make Oakville your home, we would like to make you aware of the Province’s announcement on January 15, 2019 to conduct a Regional Government Review of eight Regional Municipalities (including Halton Region, Simcoe County, and several lower-tier municipalities) “to ensure that Regional Governments are working efficiently and effectively.” A two-person advisory body was appointed to submit recommendations from the review and their consultations to Steve Clark, the Minister of Municipal Affairs and Housing.

The Regional Government Review is a flawed process. Engaging two advisors to review not 5 but 82 municipalities in less than six months and making any credible recommendations is beyond superficial. Our regional governance structure works well, so our focus should continually be on improving rather than destroying it.

One of the possible, and many say probable outcomes from this review is a proposal for Oakville to be amalgamated with the other Halton Region Municipalities, i.e. Burlington, Milton, and Halton Hills, to form a large regional bureaucracy, The City of Halton. What will this mean for you and our community?

The Municipalities within Halton Region have very different fundamental characteristics and needs. To name but two: compare the low population density of Halton Hills to that of Oakville which is 6 times higher and compare a population growth rate of 30% in Milton that is 7 times higher than that of Burlington. Each of our Municipalities has developed and evolved differently based on its own needs, vision, character, culture, and priorities.

Forced amalgamation will therefore be extremely costly in financial, social, and human terms. All of this will be compounded by years of disruption, confusion, and conflict, as each Municipality has its own unique vision, character, and set of issues. The financial cost of forced amalgamation will be enormous. A large Regional bureaucracy will be more costly to operate than our current decentralized government system. Studies by respected organizations on previous Ontario amalgamations conclude that they did not result in cost savings, lower property taxes, or any tangible benefits. The authors of the 2015 Fraser Institute report, for instance, found that “in each case, we see significant increases in property taxes, remuneration, and long-term debt.”

Forced amalgamation will not produce benefits. While counterintuitive, multiple studies throughout the world have shown that municipal amalgamations rarely work. Benefits are very hard to get and, where they are realized, they take very much longer to appear.

Forced amalgamation will mean a loss of our voice. A large Regional bureaucracy will be more removed from the citizens it serves, more difficult to govern and control, and less responsive to local needs of the residents. Under jeopardy is Oakville’s Official Plan that protects the character of our stable neighbourhoods and our environment and which directs growth to appropriate areas.

Forced amalgamation is trying to fix a system that is not broken. Our two-tier (local and regional) government in Halton efficiently and effectively serves the residents of Oakville and its other municipalities at the local level, while providing coordinated planning and shared services across the region as evidenced by these indicators:

Forced amalgamation will have serious financial, social, and human consequences. Property taxes will increase and the level and quality of services at the regional and local levels will likely be negatively impacted – everything from policing, fire protection, waste collection, snow removal, community centres, and libraries. AND within a large bureaucracy, our voices will be lost. These are risks that we should not be prepared to take.

If you support STOP AMALGAMATION, we encourage you to act:

Thanks for your consideration.

Please remember to vote this Monday, October 22nd for Ward 2 and Mayoral candidates. Voting is a key civic responsibility for all members of the community; we can only keep the West Harbour area such a great place to live through our civic engagement.

A big thank you to all of the residents, Mayoral candidates, and Ward 2 Candidates who attended our Annual General Meeting on Tuesday.  Special thanks to the Oakville Yacht Squadron, who hosted us in their lovely facility right in the harbour and within the West Harbour area itself.

Bill Ardell did a wonderful job as MC, keeping the evening flowing, and maintaining decorum amongst all of the interested parties during the evening.

Cathy Duddeck, Ward 2 and Regional Councillor, spoke to issues of importance to the West Harbour Residents’.  Her presentation spoke to a great variety of topics, highlighting what a big task all Councillors undertake representing Oakville and our West Harbour area.  She has done a great job representing our neighbourhood over the years and was acclaimed in this years elections.

Ward 2 Candidates Ray Chisholm and Fraser Damoff made impassioned speeches about the issues of concern, followed by Mayoral Candidates Rob Burton, Julia Hanna and John McLaughlin. It was an interesting and informative evening as each candidate outlined their positions.

Resident’s had the opportunity to ask questions of all of the candidates, with candidates being given a time limit for responses.

The Mayor and Councillors will be in attendance as well as the candidates for the upcoming Municipal Election.

If you have specific questions that you would like to add to the agenda, let us know

At The Oakville Yacht Squadron

West side of the river at Oakville Harbour

Come, meet your neighbours and find out what is happening in your community!

Once again the WHRA BBQ was a roaring success.  Thank you to all who attended, brought salads, good cheer and merriment to our neighbourhood gathering. Special mention to Mother Nature, who held off with the rain until the last neighbours went home.

If you are missing trays or containers, please drop by 56 Kerr Street to pick up your items.

Attached are photos from this highlight of the WHRA Social Calendar. 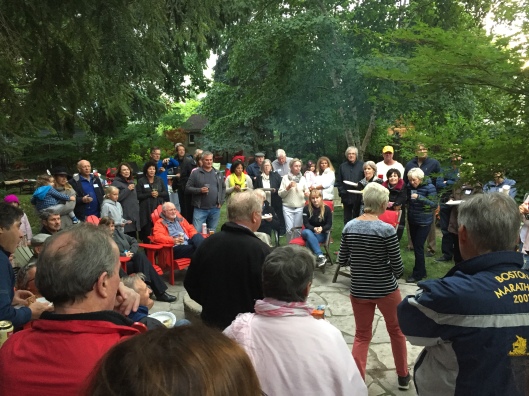 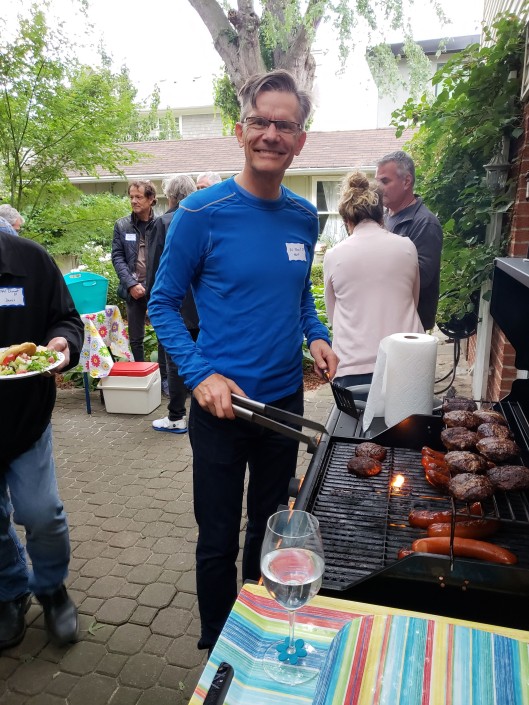 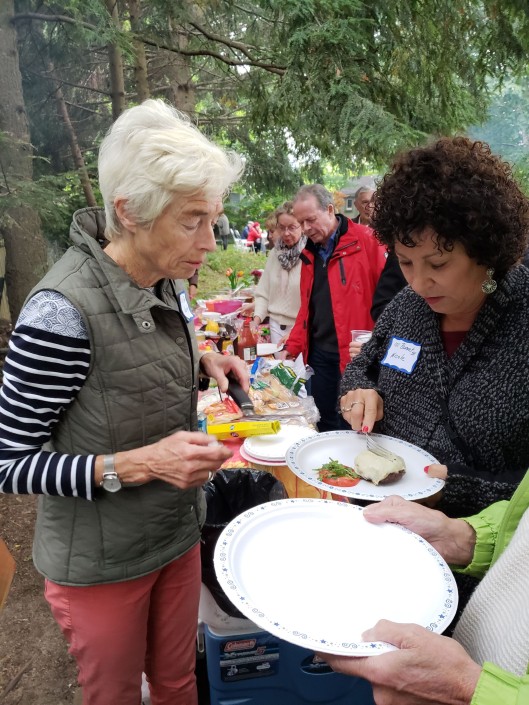 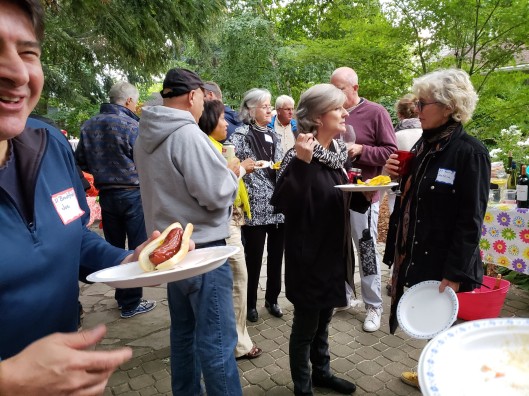 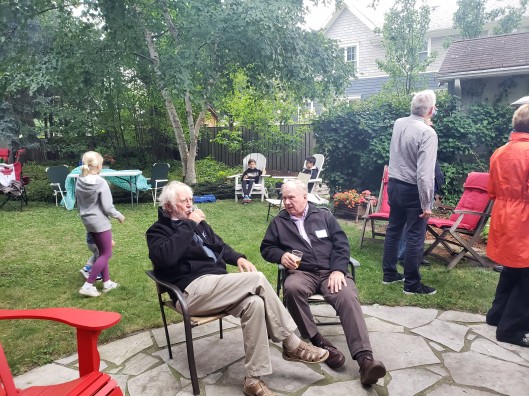 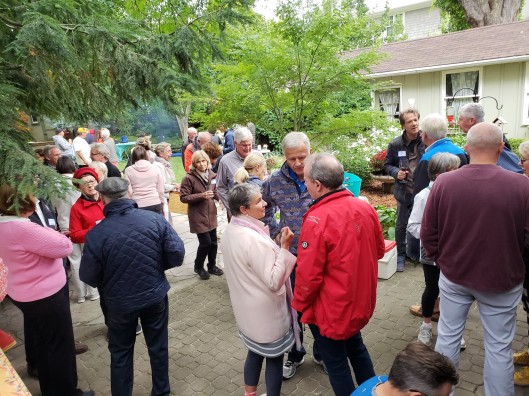 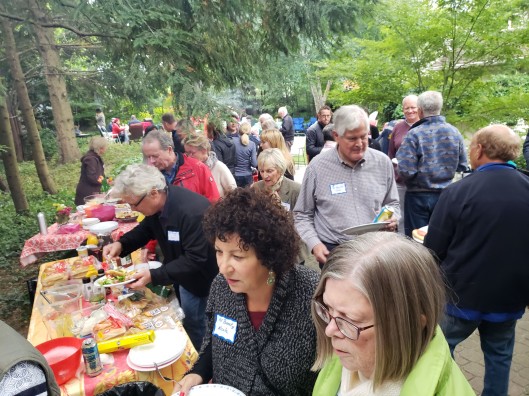 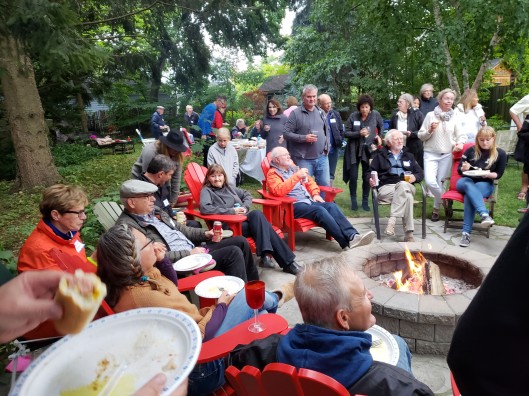 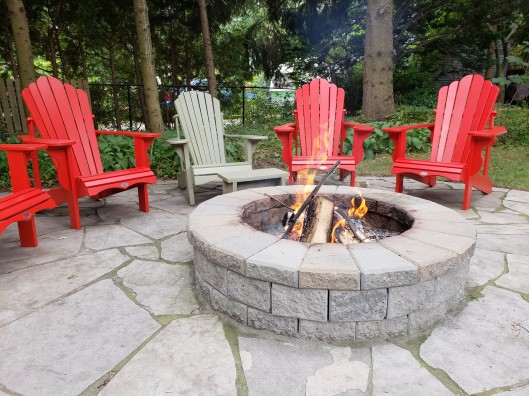 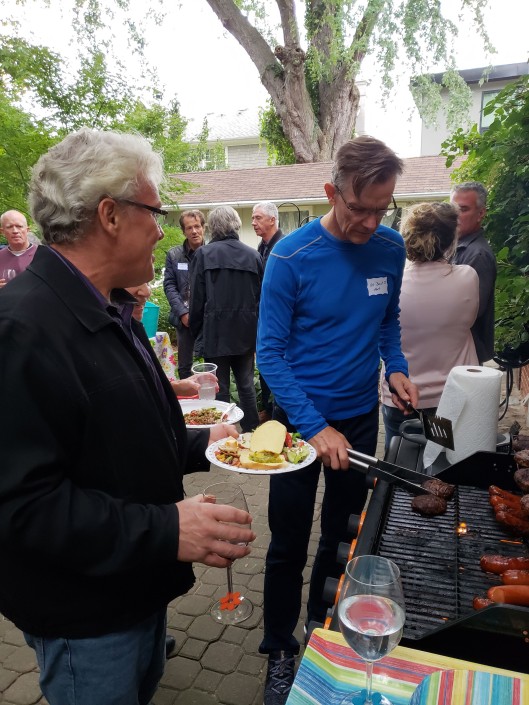 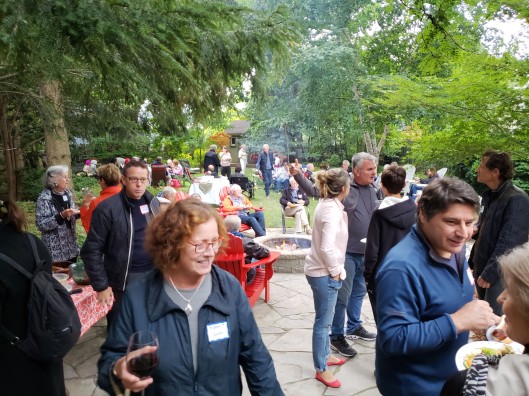 We will once again host the annual WHRA BBQ on the verdant lawns of Jenn and Stephen’s home, at 56 Kerr Street on September 9th. The BBQ begins at 5pm. All WHRA resident’s are welcome to attend this fun filled annual event.

The WHRA Executive will be providing hamburgers, hot dogs and sausages. Resident’s are requested to bring a side dish for the communal table. Chairs and tables will be available, but resident’s are encouraged to bring one or more folding chairs with them if possible.

Please RSVP to Lesley Henshaw or Carole Gilbert so that we may estimate numbers for food at: